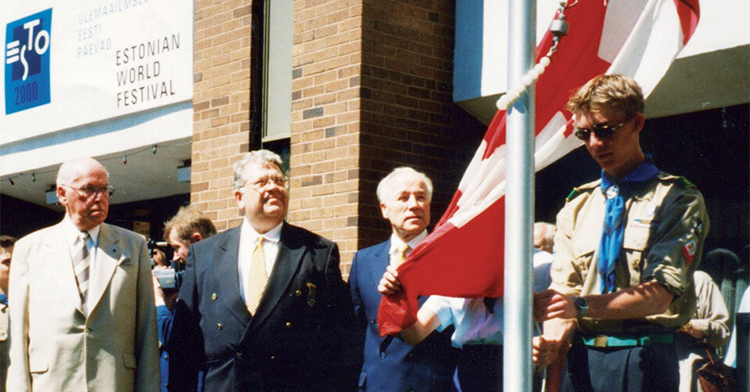 Growing up in the Canadian Estonian community in the 1980’s, children were taught to revere the often mythical heroes who defended the Estonian people against foreign powers who sought to destroy our culture and language.

Kalevipoeg, our deeply flawed national hero, was prime among them. His arm cast in stone at the gates of Hell, Kalevipoeg was forced to remain there, standing guard until Estonia was free from foreign occupation. Estonian youth were urged to draw inspiration from Kalevipoeg’s strength and learn from his poor choices and many mistakes.

Estonia’s first President, Konstatin Pats, embodied Estonia’s independence and his photo hanging in every Estonian school classroom - with his stern glare - motivated Estonian Canadian youth to actively advocate for the independence he represented. Beside every photo was General Laidoner, who was revered as the champion of Estonian independence.

In our Canadian community, we had our own local heroes - often church pastors, leading journalists and elected community leaders - including Endel Ruberg, Heino Jõe, Edgar Marten and Ilmar Heinsoo. For me and my peers in the 1980’s, Laas Leivat, was, and continues to be one of those hero. Our community has benefitted from his principled commitment to defending our values, his wisdom, warmth, humor and genuine caring for our community. He is our collective voice-of-reason and a stabilizing force in a community that can often be polarized by politics.

We often associate him with politics and his leadership of EKN during the fight for independence in the 1970’s and 80’s, and indeed, he has been our community’s most successful advocate and is deeply respected among his counterparts in other communities, Canadian political leaders, media and of course within the Estonian government itself.

Laas’ service to our community has not come without significant personal sacrifice.

It is no surprise that Canada was the first Western government to formally recognize the independence of Estonia, Latvia and Lithuania. Laas’ unique ability to weave advocacy, media and community together, disproportionally raised the profile Baltic communities into one of the most influential in Ottawa and beyond.

In 2008, Laas’ efforts were acknowledged by the Putin regime, when a nationalist pro-Putin youth movement, Nashi, included his name among other prominent Estonians, demanding that he be banned from entering Russian territory - dashing Laas’ dream of a vacation in sunny Vladivostok.

When a new generation of Canadian Estonians committed itself to joining the Estonian Central Council in Canada in 2014, Laas immediately offered his support and encouragement. Laas, joined by other senior EKN members, Reet Marten-Sehr, Marta Kivik, Anne-Liis Keelmann and Tõnu Altosaar, mentored and guided the new council through significant early challenges. Today, EKN has restored its place as a respected leader among the Central and Eastern European communities in Canada - thanks in large part to Laas’ ongoing guidance and active mentoring.

In 2021, we find ourselves in a world that is full of uncertainty, at the same time, our community faces existential challenges unlike any we have faced since our community was first established in the late 1940’s.

Laas and his wife Ellen’s volunteerism and service to our community in Canada and worldwide, has inspired new generations of Estonian Canadians to contribute to its growth and development. Today’s community volunteers who volunteer so much of their daily lives to keep our heritage schools, scouting, summer camps, churches and other cultural groups alive, deserve our appreciation.

Most recently, Laas has, yet again, stood to defend our collective values by rejecting the racist and homophobic positions promoted by Estonia’s populist far-right EKRE, despite the very real threat of backlash from this fringe movement’s supporters in Estonia and within the Canadian-Estonian community.

Adopting and advocating for principled positions is never easy and is almost always, a lonely endeavor, absent of glory or accolades. The defence of our values and norms, is thankless, but is fundamentally critical to keeping our community from falling apart. It is here, on the front lines, where Laas Leivat has stood and fought for us, for decades. It has been a personal honour and privilege for me to continue standing with him.

While advancing age may physically slow some of us, there is no indication that at 80, Laas Leivat is planning any kind of retreat from the battle to defend our values and norms. On the contrary, over the past year, he has bravely waded into the thick of it.

Thank you Laas, for your years of sacrifice, service and for being an inspirational mentor. It is on your broad shoulders upon which we continue to stand. Happy 80th birthday!