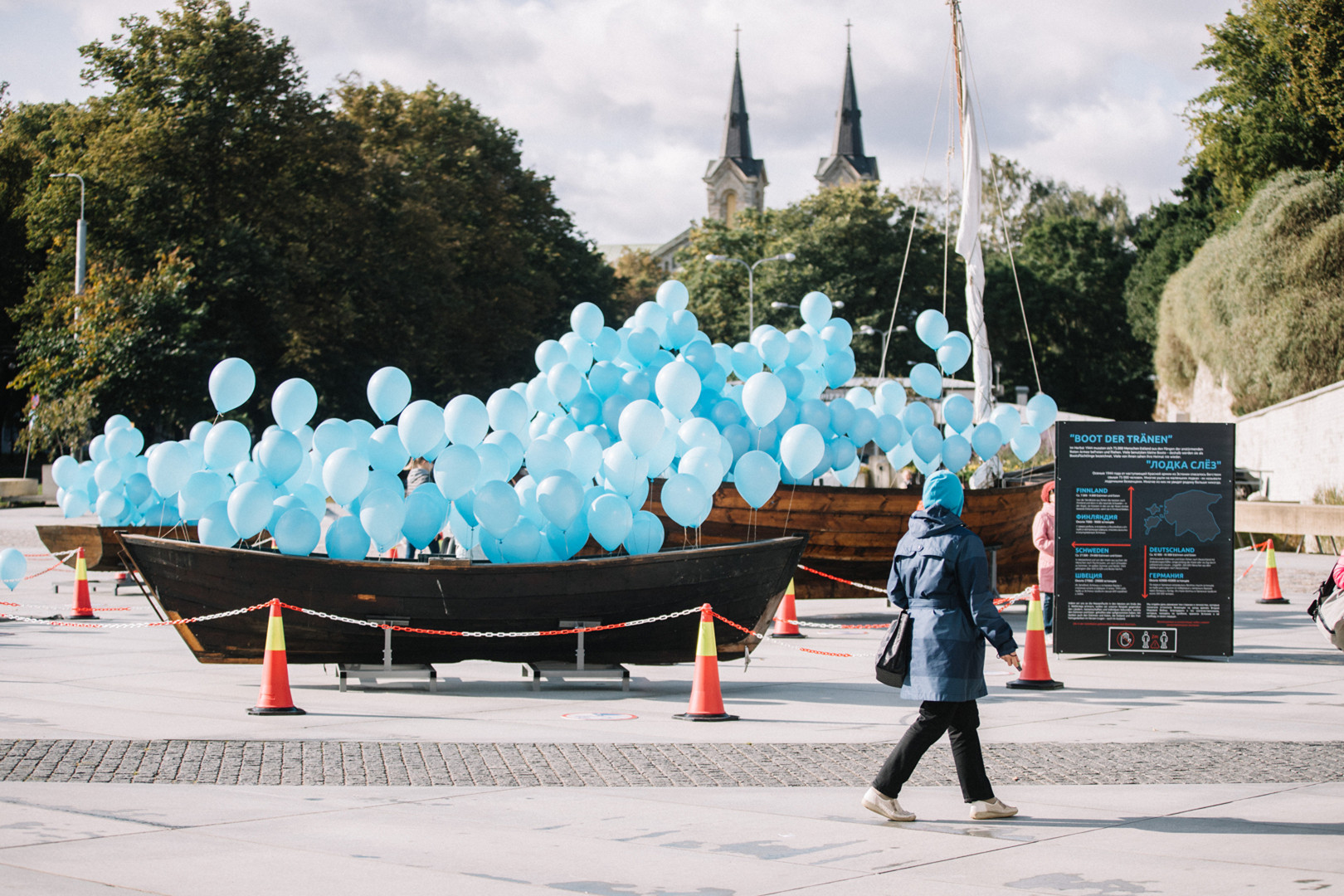 The "Boat of Tears" in Freedom Square viewed from above. Source: Estonian Institute of Human Rights

An installation in memory of the tens of thousands of Estonians who fled by sea in 1944 to escape the Red Army was displayed in Tallinn's Freedom Square (Vabaduse väljak) on Sunday. Many of those who left never returned.

"The Boat of Tears" (Pisarate paat) exhibition featured boats similar to those the Estonians would have used to flee across the Baltic Sea to Sweden and Finland in what is known as the "Great Escape" (Suur Põgenemine). Blue balloons were used to symbolize tears and people and a map of Estonia was marked out on the floor surround by an "iron border".

Seventy-five years ago, an estimated 7,000 - 9,000 people fled to Finland from Estonia's northern coast. From there they moved on to neutral Sweden, fearing they would be returned to occupied Estonia.

Approximately 27,000 - 29,000 Estonians arrived in Sweden, mainly from Western Estonia and the islands. In the late summer and autumn of 1944, more than 600 ships and boats arrived from Estonia. Many of these people, who have also known as "boat refugees" continued their journeys to the U.S., Canada, UK and Australia where they settled.

Additionally, 42,000 - 45,000 Estonians went to Germany on evacuating ships, but some also went along the coast or by train through Latvia and Lithuania. Close to 300,000 people from the Baltics arrived in Germany.

Cultural people, politicians, health care workers and agricultural and educational figures were forced to leave, but half of those who fled were farmers, fishermen or workers.

These Estonians went on to form organizations abroad which were engaged in the preservation of Estonian culture and, in co-operation with Estonian diplomats who remained in the West, fought for the restoration of Estonian statehood.

The Estonian Institute of Human Rights (Inimõiguste Instituut) wrote on its website: "By commemorating the mass flight to the West during the Second World War, we pay tribute to the countries, communities and individuals who received and helped Estonians. We also thank the Estonians who kept Estonia and its freedom in their hearts whilst abroad."

Estonians fled because during the first Soviet occupation (1940–1941) in 1941 almost 10,000 people were deported to Russia and 7,000 were arrested on political accusations. Almost 33,000 men were conscripted into the Red Army and the majority never saw their homeland again. Approximately 25,000 people were evacuated from Estonia to the Soviet Union and in the spring of 1941 about 7,800 people were able to reach Germany as resettlers.

These figures are all estimations, the Estonian War Museum says, but in total the human losses in the first year of occupation exceeded 70,000 people.

The exhibition can be seen until Monday afternoon.