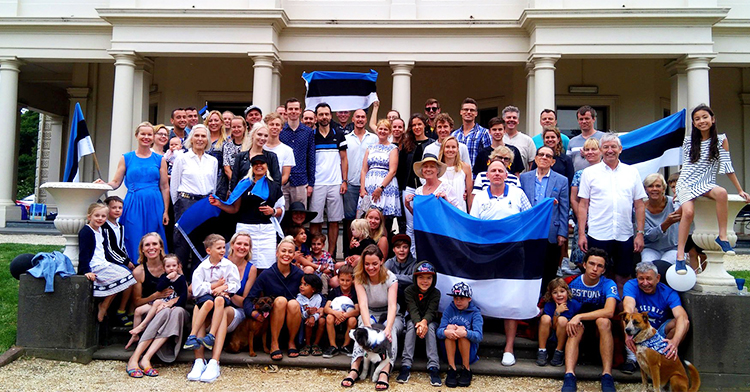 On 5 January, the Council of Estonian Societies in Australia (AESL) and the Estonian Archives in Australia (EAA) are celebrating their 70th anniversary. Both organisations were established in 1952. Congratulations and we hope you continue having fun preserving Estonian cultural identity in Australia!

Read the writings of AESL President Dr Juho Loovere and Vice President Sirje Rivers Jõgi about the past and about the future:

The Archive has served the Estonian community for 70 years by being the repository for the history of Estonian  activity and achievement in Australia.  It hosts visitors from all states of Australia and from overseas. The number of both local and overseas  enquiries grows each year as descendants of the post war immigrants research their family histories.

Dr Hugo Salasoo did a commendable job in collecting firstly material about activities in Australia and later activities worldwide.  The Archive held books by Estonian authors, about Estonia and in Estonian. He collected scientific papers by Estonian scientists from all over the world, newsletters and newspapers.

Since the start of 2000 the emphasis has been placed again on material by Estonians in Australia and the international collection has been sent to various memory institutions in Estonia. The Archive is about to move into new premises in the Sydney Estonian House and will continue to be the centre for information about Estonians in Australia.

The Archive has continued to grow and thrive due to the enthusiasm and commitment of the volunteers. We have a proud tradition of long service.  Dr Hugo Salasoo was the honorary archivist for the first 40 years.  Eili Annuk has been a volunteer in the Archive for 40 years and continues her work today in maintaining the  online In memoriam database which is constantly used by people researching their family history.  Maie Barrow has been the archivist for 27 years and Reet Simmul was the assistant archivist for 26 years.  Together they have organised exhibitions and lectures to introduce Estonian history and culture to the Estonian and Australian communities. Taimi Nurm, Valler Lipping, Ivo Kauniste are long term members of the volunteer Archives family. Kristi Barrow has joined us to provide all the modern media platforms that are so necessary in these times. Most volunteers remain with the Archive until they can no longer climb the stairs to the current Archive rooms. The Archive is regarded as the premier ethnic archive in Australia and is often called upon to advise other ethnic communities on how to preserve their history. We are proud of our achievements. The latest achievement was early in 2021 when our oral history collection was inscribed into the UNESCO Australian Memory of the World Register.

EAA is planning to mount an exhibition to celebrate the 70th anniversary of both the Council of Estonian Societies in Australia and the Estonian Archives in Australia. While the exhibition will be in the Sydney Estonian House, it will also be online, available through the EAA website archives.eesti.org.au.

The first wave of Estonians migrating to Australia was in the 1910-20’s.   The second wave occurred during and after the second world war.

The AESL (“Liit”) was established in 1952 with 12 member organisations from three states.  It was the over-arching organisation to unite all Estonian organisations across Australia and coordinate their activities.  Original members included the Societies (Seltsid) from each main city, however over the years many other local organisations joined   e.g. choirs, dance groups, scouts and guides, handicrafts; and the Estonian Relief Committee (Eesti Abistamise Kommittee – now known as the Estonian Cultural Foundation in Australia Inc (Eesti Kultuuri Sihtasutus Austraalias).  Many other activities grew in each city – e.g. Täienduskoolid; sports clubs; academic corporations; churches. These days, many groups formed by the older generation have dwindled in members and activity, and the national weekly newspaper “Meie Kodu” has ceased.

When AESL was established, there was no email, no fax, no video conferencing; and even phone calls were not so easy.  So Liit was set up so that the Committee in charge would be in Sydney for three years, then Melbourne for three years, and then Adelaide for three years, and then repeat.  This rotational model was appropriate then, to share the leadership across the country, yet maintain some continuity in thinking and operations.  There were also annual meetings for all members across Australia.

Liit (AESL) in the early days was involved in some political activity, highlighting the cruelties and atrocities committed by the communists and soviets to politicians and media.  Through the 1980’s, representatives from the three Baltic communities met regularly with the Australian Prime Minister and Minister for Foreign Affairs to discuss issues.   Following the re-independence of Estonia, these activities have fallen by the wayside.  However recent activity in the Ukraine and by Byelorussia has us reconsidering this area.

Over the past two years, AESL has considered its future, and has restructured.  With a new Constitution, the Board consists now of one representative from each state or territory, plus four people elected independently.  This is to ensure that all parts of Australia maintain some involvement and commitment to AESL, and that Liit continues to service the wider community as well.
AESL has stepped up its involvement with the international Estonian community, and intends to have members participate in Laulupidu and Tantsupidu every time.

Most of the ongoing activity has been due to the dedication of key individuals in each city.  However they are mainly from the refugees from the 1940’s and the next generation.

The Executive elected in November 2021 is :

One of the key activities to regularly bring Estonians in Australia together has been the Eesti Päevad.  This Festival started in 1954, and has mostly been held in the three main cities of Sydney, Melbourne and Adelaide every two or three years, usually straight after Christmas.  The festival includes choirs and dance exhibitions, sports games and competitions, handicraft and art displays, and of course many functions (pidusid) with traditional Estonian food and drink.

The three main cities each have their own Eesti Maja.
The Sydney Eesti Selts “Eesti Kodu Linda”  was established in 1927.  They moved from rented rooms to the current Sydney Estonian House on 6 July 1940. This property had been purchased in the 1920’s, and Estonians had built the house with their own resources and labour.  Additional land was purchased in 1946.  New extensions were built in 1957 again by local Estonians own hands.   Currently major renovations are taking place to make the house more useable and profitable for the future.
The Sydney Eesti Maja is also the home for the Estonian Archives in Australia.

Melbourne Eesti Selts was formed on 8 Feb 1914.  Melbourne’i  Eesti  Ühing “Kodu” was established on 19 June 1938.  The renovation of the library began on August 23, 1949.  Melbourne Eesti Maja in Coburg was opened in 1955.  However, activities and membership grew to make this home too small, and the current Eesti Maja, an old cinema, was purchased in 1971.   This was the central venue for the ülemaailmse eestlaste kokkutulek “ESTO” in 1988.

The Adelaide Estonian Society was formed on 8 April 1949. They purchased a small house in Kensington that was later sold and the current Eesti Maja purchased in North Adelaide on 10 June 1958

In the past, there was also an Eesti Maja in Perth, and one in Thirlmere (a small town about two hour’s drive from Sydney, where the population grew to over 90% Estonians).  This house was sold in the 1990’s, due to insufficient activity to raise funds for ongoing costs.

The communities in each city want to maintain their houses as community centres for Estonian activities, but these days they are struggling with finances due to the amount they are used by local Estonians.

AESL is now discussing future needs with the younger generations, those born here as well as recent emigres, and are looking to them to get involved and take over.  However, these groups have different desires and priorities.  While the previous generations wanted to preserve the Estonian culture via many organised activities, younger generations can access all this via electronic media.  Many younger people do not want to formally join organisations.  We have also found that many other national groups are facing similar issues.

We might be on the other side of the world to many other Estonians, but we continue to be proud of our heritage and look to maintain it in many ways.