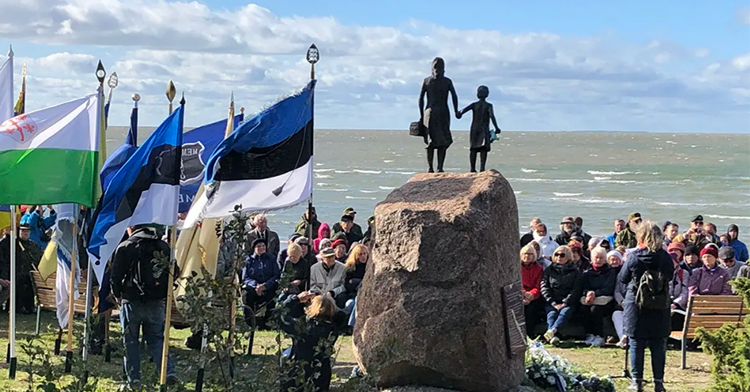 Commemorating the Great Refugee Flight to the West

One of the main reasons there is such a large and widespread global Estonian community is a result of the Great Refugee Flight to the West (Suur põgenemine) in 1944.

In the late summer and autumn of 1944 (peaking from September 19th to the 23rd), when the Red Army was advancing, around 75 000-80 000 people fled from Estonia, and a total of nearly 300 000 people left the Baltic States. This year marks the 77th anniversary of those events.  Many people used small boats to cross the Baltic Sea to Sweden and Finland. This is why the refugees became known as boat refugees (paadipõgenikud). Many people who left then never saw their homeland again.

The journey had become extremely hazardous due to hostilities. Small boats were usually meant for coastal fishing only, not covering extended distances while overcrowded. According to estimates, 6-9% of refugees lost their lives on this journey. Today it is impossible to say how many boats never reached their destination and were lost at sea. Among larger vessels transporting refugees to Germany, two perished due to hostilities: the hospital ship Moero that left Tallinn on 21 September, and the naval training ship Nordstern that left Kuressaare on 3 October.

What were the reasons for leaving?

The main reason for escaping was a great fear of the advance of the Red Army, as the terror of the first Soviet occupation (from June 1940 to July 1941) was still fresh on everyone’s mind. The first Soviet occupation saw repressions, arrests of public officials, disappearances and imprisonment, and nearly 33 000 Estonian men were mobilised into the Red Army. Estonians had also lived through mass deportations organised by the Soviet authorities on 14 June 1941 when more than 10 000 people were deported to Siberia from Estonia.

Where did the refugees go?

More than 40 000 Estonians reached Germany and German-occupied territories, and 27 000 Estonians arrived in Sweden. Estonian refugees usually converged in displaced persons camps in the U.S. and British occupation zones in Germany. The camps with the largest Estonian population were located in Geislingen, Augsburg and Lübeck, with each housing several thousand Estonian refugees at peak capacity. These camps were only closed in the early 1950s.

People were convinced they were leaving temporarily, for a few months or years at the most. When it became obvious over time that there was no going back, people settled or went on to other countries across the world. The largest Estonian communities formed in Sweden, the United States, Canada, the United Kingdom and Australia. Some refugees, a total of 21 500 people with those who had served in the German army, were repatriated to the Estonian SSR. The Soviet Union had set up a powerful propaganda machine for that purpose.

In these countries, Estonians formed various organisations of expatriate Estonians that focused on preserving Estonian culture and fighting for the restoration of Estonia’s independence.