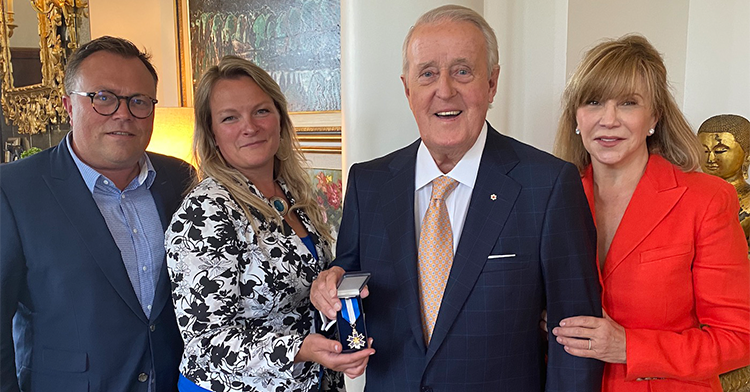 Montreal – On the 30th anniversary of Canada’s reestablishment of diplomatic relations with The Republic of Estonia, The Estonian Central Council in Canada presented former Prime Minister Rt. Hon. Brian Mulroney, with its Award of Merit for service to the Estonian community in Canada, in Montreal.

Mr. Mulroney was a key figure in advocating for the recognition of Baltic independence among Western world leaders.

In 1984, he gave hope to thousands of Estonians who had gathered from around the world, for the World Estonian Festival in Toronto, when Mr. Mulroney committed to support a free and independent Estonia.

In his meetings with other Western leaders, Prime Minister Mulroney stood as a true ally and champion for freedom and democracy in the Baltic States and around the world. In addition to expressing his support for the Canadian communities that fled nations occupied by the Soviet Union, he resolutely refused to recognize the Soviet occupation of them, despite significant pressure from Soviet leaders.

“Mr. Mulroney injected our community with hope and inspiration and helped motivate us to continue our fight for freedom,” said Estonia’s Honourary Consul in Toronto, Laas Leivat.

On August 27, 1991, during a press conference with President George HW Bush in Kennebunkport, Maine, Prime Minister Mulroney announced that Canada take the lead among Western nations and “would begin the process of establishing full diplomatic relations with the Baltic states.” That decision by Prime Minister Mulroney and his government paved the way for other Western nations and allies to follow Canada’s lead. The United States recognized Baltic independence on September 2, 1991.

“Today’s Canadian political leaders should look to Mr. Mulroney’s leadership as an example of how Canada can truly shine and lead on the world stage,” said Estonian Central Council in Canada President, Kairi Taul Hemingway.

“We are deeply grateful to Mr. Mulroney’s for his leadership and principled decision to quickly recognize Baltic independence which emboldened other leaders to the same and helped ensure that the Baltic states would never again fall under Russian occupation” said Central and Eastern European Council in Canada President, Marcus Kolga.

The Estonian Central Council in Canada was established in 1952, as the elected representative organization for all Canadians of Estonian heritage.