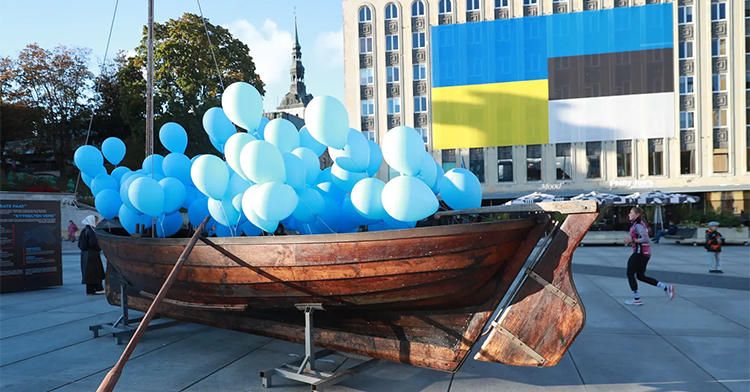 An exhibition by the Estonian Institute of Human Rights on Tallinn's Freedom Square remembers the journeys of Estonians who fled the advancing Soviet Army in 1944.

A balloon-filled boat, the Boat of Tears, has been installed to commemorate the approximately 80,000 Estonians and thousands more people from the region who fled across the Baltic Sea to Finland, Sweden and Germany in small boats.

The journeys made in 1944 were perilous. Most of the boats were dangerously overcrowded and those aboard put their lives at risk to escape. For many, staying behind would have been just as dangerous.

Those who attempted the journey faced rough seas and often engines gave out on the way. It is not known how many people died attempting to flee.

Around 9,000 Estonians fled to Finland where many then moved on to Sweden.

Between 27,000 and 29,000 Estonians arrived in Sweden, having started their journeys on the western islands of Hiiumaa and Saaremaa. In the summer and autumn of 1944, more than 600 ships and boats landed in Sweden.

Various sources show over 40,000 Estonians evacuated to Germany. Many people traveled along the coast or along the railway lines through Latvia and Lithuania.

Many who left never saw their homeland again. Those who fled are often referred to as "boat refugees" and the situation as "the great escape to the west".

Find out more about the evacuations on the Estonian Institute of Human Rights' website.

You can also read Literary scholar Tiina Ann Kirss' article about her parents who were among those who fled in 1944, which ERR News first published in 2020.