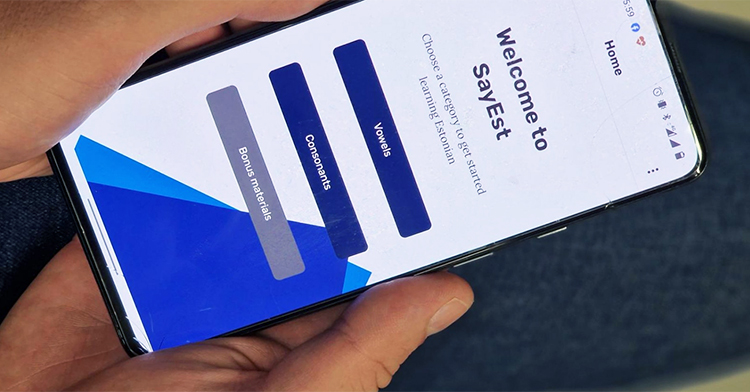 Researchers from the University of Tartu Institute of Estonian and General Linguistics have created a mobile app SayEst that allows learners of Estonian to practice the pronunciation of vowels and consonants at a time and place that suits them. The app runs on the Android platform, is free of charge and can be used regardless of the learner's mother tongue; the user interface is in English and Russian.

The authors of the app also encourage language teachers to use SayEst as a tool in their lessons. "Pronunciation exercises are done in language lessons, but individual feedback and guidance are often limited due to time constraints. Although perfect pronunciation is not necessary to speak a language at a good level, language learners are often afraid of making mistakes and therefore practice less than they might like. Practising pronunciation with SayEst allows learners to gain confidence without fear of criticism," said Anton Malmi, one of the app's creators and a Junior Research Fellow in Estonian and Finno-Ugric Linguistics at the University of Tartu.

SayEst is the first language-learning app that focuses specifically on teaching Estonian pronunciation by giving users feedback on their pronunciation. The app consists of theoretical tutorial videos and different types of practical exercises in which the users learn to recognise phonemes, compare their pronunciation with that of a native speaker and, thanks to automatic speech recognition, receive feedback.

The app has been developed at a time when Estonian language learning is becoming increasingly topical for a number of reasons, such as the arrival of Ukrainian war refugees in Estonia and the transition to Estonian-language education by 2035. At the same time, the number of Estonian language teachers does not keep up with the demand. Therefore, the new application will further expand language learning opportunities. In addition, it can be used as a teaching tool should the coronavirus pandemic once again hinder face-to-face learning.

The authors of SayEst are Katrin Leppik, Anton Malmi and Pärtel Lippus, researchers at the Institute of Estonian and General Linguistics. In the future, they plan to improve speech recognition, so that the app can also train the pronunciation of Estonian degrees of quantity and palatalisation, and add voice-controlled games to make language learning more entertaining.