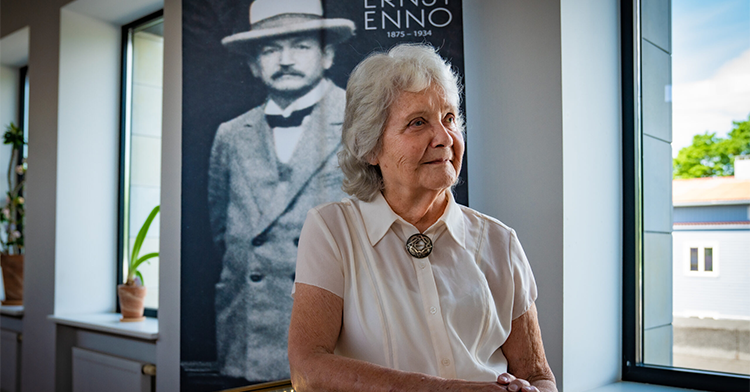 The Estonian American National Council (EANC) is pleased to announce, on the anniversary of Henrik Visnapuu`s birth on January 2, 1890, that the winner of the re-established Henrik Visnapuu award is author Elin Toona.

Elin Toona is being recognized for her life-time work as both an Estonian and English-language writer whose works explore the experience of exile and refugee life abroad, in the context of a young Estonian forced to flee her homeland due to the Soviet invasion of the country in 1944. She deals with the complicated and at times seemingly indefinable existential questions and challenges of adapting to a life in exile.

Her masterful memoir In Exile: A Life Story of War and Peace, first published in English (2013) and then in Estonian (Pagulusse, 2017), was nominated by The Economist magazine as one of the Best Books of 2013. This is Elin’s personal account of the horrors she and her family experienced during WWII followed by an even more confusing peacetime in class-conscious post-war England while adult “DP’s” (Displaced Persons) and Elin struggled to find their identity.

Other titles from her pen include the novels Puuingel (´The Wooden Angel´); Lotukata; Sipelgas Sinise kausi all (´An Ant Beneath the Blue Bowl´); Kaleviküla viimane tütar (´The Last Daughter of Kaleviküla´); Kolm Valget Tuvi (´Three White Doves´); and Mihkel, muuseas (´Mihkel, By the Way´).She has also written a biography about her renowned grandfather Ernst Enno, and the life story of her grandmother, Ella. Her other published works include short fiction, poetry, oral stories and newspaper articles in the Estonian and English languages.

Elin Toona is a two-time winner of the Visnapuu Award. She was first recognized with a Henrik Visnapuu Foundation prize in 1966 for her debut Estonian language novel Puuingel, about the life of a refugee Estonian girl navigating a new life in London.

Elin Toona was born in 1937 in Estonia. Her father was director Enn Toona; her grandfather was the well-known author and poet Ernst Enno. In 1944 Elin fled the Soviet terror, escaping to Germany with her mother, actress Liki Toona and grandmother Ella. They moved to Great Britain four years later. In London, Elin studied drama, and by the 1960s she had performed on the silver screen and the smaller screen. In 1967 Ms. Toona married and moved to Florida, USA. Her passion for writing began in Great Britain and continued in the United States.  She is a member of numerous literary associations, including The Estonian Writers’ Union, the Estonian PEN Club, and the National League of American PEN Women.

The EANC Henrik Visnapuu Award will be officially presented at the Tallinn Kirjanike Maja (Writers´ House) later in January. The Estonian American National Council (Eesti Rahvuskomitee Ühendriikides, ERKÜ) offers this award in partnership with the Estonian Writers´ Union and the Luunja Municipial Government.

The EANC Henrik Visnapuu Award includes a cash prize of $2500 from the EANC and an artistic work commissioned by Luunja municipality from an Estonian artist.  This year Leonhard Lapin received the commission to produce the award.

One of the judges, Sirje Kiin, voiced the opinion that “the need for such an international award is shown by the fact that we received nominations for fifteen strong candidates from six countries, with the works being in five languages: Estonian, English, Finnish, Russian, and German. We expanded the categories, so that besides literature, nominations were received in the areas of art, music, and historical research.  The award winner Elin Toona is a symbol both historically and metaphorically.  Her recent return to her homeland from exile and her double Visnapuu award, starting and ending her long creative journey, make a whole and satisfactory circle.“

About the EANC Henrik Visnapuu Award for Arts and Letters

The first Henrik Visnapuu Prize was established by the Henrik Visnapuu Foundation (USA) in 1952 and consistently awarded annually through 2007, after which the award was discontinued due to the organizers’ death.

In 2020, the Estonian American National Council decided to re-establish a literary and cultural award in Visnapuu’s name, to be awarded every other year.  Fifteen excellent candidates were submitted by the April 1, 2021 deadline, and included submissions from the United States, Estonia, Russia, Finland, Germany and Canada.

The Award is given in recognition of Estonia and diaspora-related works of poetry, prose, memoirs, or research, and may also be given for cultural works, visual and performing arts, events introducing the Estonian diaspora, culture, or history in Estonian or another language.

Henrik Visnapuu was one of the most prolific and multifaceted of Estonian authors; he has over 30 publications to his name, including more than 20 poetry collections, memoirs, scripts, romantic verse,  and essay books. As a high-level government official in Estonia during the late 1930s he helped shape and significantly influenced the entire country’s cultural policy of the time, but also in 1941-1944 during years of war and the occupation.