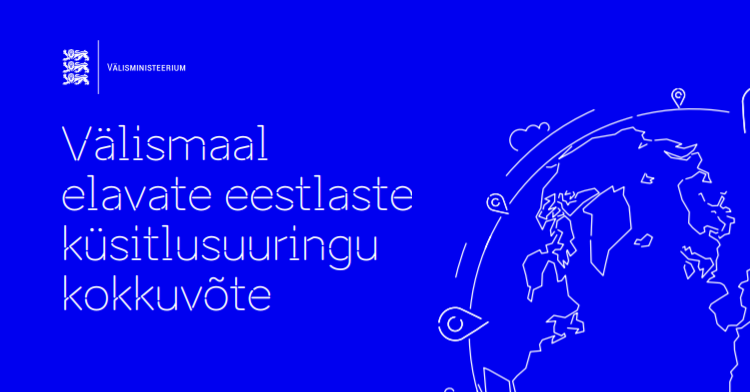 The Ministry of Foreign Affairs conducted a survey among Estonians living abroad to find out how prominent a place their land of origin holds in their everyday lives. Another aim was to get an overview of their expectations for the state, so that they would be more interested in helping achieve Estonia’s objectives for the future.

Foreign Minister Eva-Maria Liimets said that the goal of the survey was to get honest feedback and substantive proposals from Estonians living abroad for an improved planning of actions aimed at the community.

“It is crucial to us that Estonians across the world feel that they matter for Estonia, are always welcome back, and that they are interested in contributing to the development and future of our country. We can achieve this through continued substantive communication and partnership with Estonians living abroad. This is why the Ministry of Foreign Affairs is taking steps to make sure that actions aimed at Estonians abroad are more considered and truly needed,” the minister said.

Between 18 October and 28 November last year, nearly 2000 Estonians from more than 70 countries took part in the survey. The most active respondents were aged 26-45. More than a half of respondents had been away from Estonia for more than 10 years.

A large share (76%) of respondents were interested in contributing to the development of Estonia and happy with their inclusion. The results of the survey confirmed that the diaspora would like to have a strong bond with the Estonian state, and would like to help raise our profile and support our foreign policy goals. When presenting Estonia, they would like to talk about us as an open, tolerant country eager to develop.

Estonians living abroad relate to Estonian identity mainly through their native language. Even the younger generation of Estonians born abroad identifies itself through Estonian culture and heritage. Respondents noted that living abroad has given them a keener appreciation of the value of their mother tongue and culture.

Estonians living abroad expect embassies to update them on their activities. They are also ready to participate in the events embassies are organising to promote Estonia.

The majority (69%) of Estonians living abroad are happy with the consular services on offer. They would like to see more flexible and contemporary solutions in the provision of consular services, for example, when applying for a passport or an ID card.

According to respondents, their decision to return to Estonia is based on such considerations as the working and living environment, as well as Estonia’s reputation and tolerance in society in general. When returning to their native country, they are worried about difficulties related to everyday life, as well as a negative attitude towards those returning.

The summary of the survey conducted among Estonians abroad is attached (in Estonian):

The Ministry of Foreign Affairs will discuss the results at length at a virtual forum on 13 April, with an overview of actions for the diaspora and presentations by Estonians living abroad.

The Ministry of Foreign Affairs would like to thank everyone who took part in the survey.