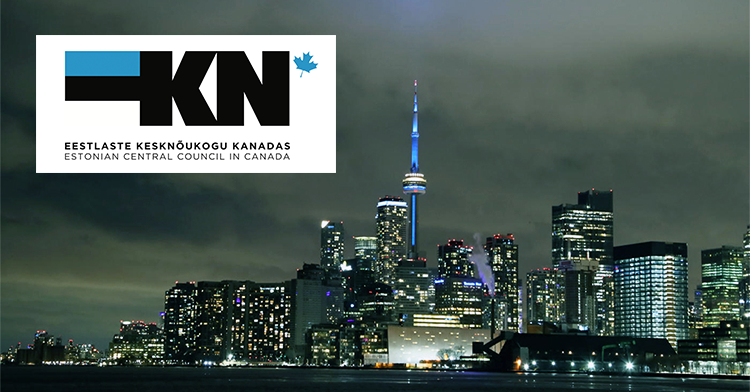 A revitalized role for the Estonian Central Council in Canada

This is the first in a series of articles profiling the work and activities of the Estonian Central Council in Canada (Eestlaste Kesknõukogu Kanadas - EKN), and Estonian communities from across Canada.

EKN is the nationally elected central organization of Canadian Estonians. Founded in 1951, mostly by former members of Estonia's parliament and cabinet ministers in exile, it is mandated to further the interests and development of the Estonian-Canadian community. Prior to 1991, its primary goal was to develop relationships with Canada’s political parties, and levels of government and publicize the unlawful occupation of Estonia by the USSR. During these years, the prime activity of EKN was lobbying, as it was crucial to keep the fate of the Baltic states on the political agenda of Western governments. The 'non-recognition de-jure' of the Soviet annexation was a constant battle fought in Ottawa, against relentless Soviet pressure for Canada to abandon it. Related to this was monitoring of the Helsinki Accords, signed in 1975, which required EKN representatives to attend numerous follow-up conferences in European and North American capitals to push for self-determination and compliance with human rights, as stipulated in the Accords, to which the USSR was a signatory. EKN worked actively with leaders of Estonia’s independence movement in the 1980’s, and, in 1990-91, sent eight elected delegates to the Congress of Estonia, an innovative grassroots parliament established in Estonia as part of the process of regaining independence.

Post restoration of independence, EKN shifted its focus to providing political and financial support to Estonia. Through the 1990’s and 2000’s, as Estonia successfully integrated into international bodies, such as the UN, NATO, the European Union etc., EKN began to consider new directions for its future. With new leadership and fresh ideas following December 2015 elections, EKN has been focussing on developing stronger relationships and communication networks with Estonia, and diaspora communities to meet their changing needs.

EKN currently has 22 representatives from communities across Canada and is a member of the Estonian World Council, NGO Global Estonians, Baltic Federation of Canada, and the Central and Eastern European Council of Canada. EKN has two members on the government of Estonia’s Global Estonian Advisory Committee.

It is estimated that nearly 1/5 of the total population, approximately 200,000 Estonians, now live outside Estonia. Recognizing the tremendous potential for Estonia, as well as the challenges faced by Estonians abroad in maintaining language and culture, EKN launched an initiative for greater inclusion and representation of the diaspora in Estonian governmental affairs, at its general assembly in fall 2017. The following spring, EKN’s ambitious goals were adopted by the Estonian World Council at its annual meeting in Tallinn. EKN and its Swedish counterpart, Rootsi Eestlaste Liit (REL), led a collaborative effort towards meeting these goals with Estonian Justice Minister Urmas Reinsalu, and following Estonia’s elections in March 2019, the new Minister of Population, Riina Solman.

In fall 2018, EKN and REL led an initiative to register Tallinn based not-for-profit NGO Global Estonians. Its primary goal is to develop broad-based cooperation and engagement between the Estonian government and Estonians abroad. Membership consists of established diaspora central organizations, including the Estonian World Council. Its newest member is the Estonian Worldwide Youth Network.

During Esto 2019, EKN and REL leadership were instrumental in organizing a National Congress in Tallinn under the auspices of the Estonian World Council. Presenters included President Kersti Kaljulaid, Foreign Minister Urmas Reinsalu, Population Minister Riina Solman, current Finance Minister Keit Pentus-Rosimannus and leadership from the State Chancellery, Ministry of Finance and Ministry of Foreign Affairs. Highly diverse panels represented Estonians and friends of Estonia from around the world in discussion of topics that included “Estonian identity from a global perspective”,” Global Estonians: Challenges and Opportunities”

The newfound collaboration between Estonia’s government and diaspora central organizations culminated in the establishment of the Global Estonian Advisory Committee, in fall 2019.

This is a cabinet level advisory group that includes representatives from several ministries and established diaspora central organizations. EKN had two representatives Marcus Kolga and Reet Marten Sehr, on the founding committee. Recently, EKN president Kairi Taul Hemingway replaced Marcus Kolga. Chaired by minister Riina Solman, the advisory board together with various ministries and expert subcommittees developed the new Global Estonian program (Üleilmse eestluse programm), which is scheduled to be implemented this coming fall. The program replaces the Compatriots Program (Rahvuskaaslaste program) established in 2004, which has supported Estonians abroad in maintaining Estonian language and preserving culture and identity.

In fall 2020, EKN organized an online forum with Minister Solman to introduce the program to leaders of Estonian community organizations from across Canada. EKN also reached out to the organizations to include them as official partners in the program.

Towards a revitalized and inclusive future.

Estonia has a new government, and the Global Estonian program will continue to develop and grow in its new home in the Estonian Foreign Ministry. EKN continues to lead by initiating new projects and working collaboratively with the Estonian government, NGO Global Estonians, Estonian World Council and diaspora communities. EKN is a strong advocate for including our diverse younger generations and communities across Canada in this process and future endeavours, in order for more voices to be heard.

The next article will focus on EKN in Canada.