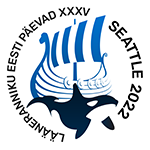 Seattle is excited to share the extraordinary and breathtaking beauty of our home in the Pacific Northwest as we join our hands, hearts, and voices to celebrate Estonia culture at the Seattle LEP2022. Since 1953, West Coast Estonians have met to sing, dance, and reconnect with old and make new friends.  Lääneranniku Eesti Päevad or LEP, is our festival of everything Estonian.

The West Coast Estonian League, (WCEL/EOLL) formed in 1954 with the main purpose of preparing and carrying out the West Coast Estonian Days has grown from 13 founding member organizations to a current 22. The presidency and board of the league rotates on a two year basis among the five West Coast population centers (Los Angeles, San Francisco, Portland, Seattle and Vancouver, BC).   The first of such festivals occurred in San Francisco over Labor Day weekend bringing together over 600 participants, and in 2019 the leadership was passed on from Portland to Seattle.

During LEP2022 we will call the Suquamish Clearwater Resort and Casino our home. The Clearwater, located on the shores of the Agate Passage, is just a short, scenic ferry ride from Seattle. The ferry crosses Puget Sound and you arrive on the traditional lands of the Suquamish Tribe.  The beautiful setting will create a unique backdrop for the festival events, from formal programming to casual activities.  Events include a Folk Party beginning with programmed Song and Dance Festival that continues with the audience joining their voices to sing old folk songs and joining their hands to twirl through well-loved folk dances.Whether participating in the Sports Day festivities, or dressing up and dancing the night away at the Ball there will be something for everyone- perhaps even a travelling sauna---- stay tuned!