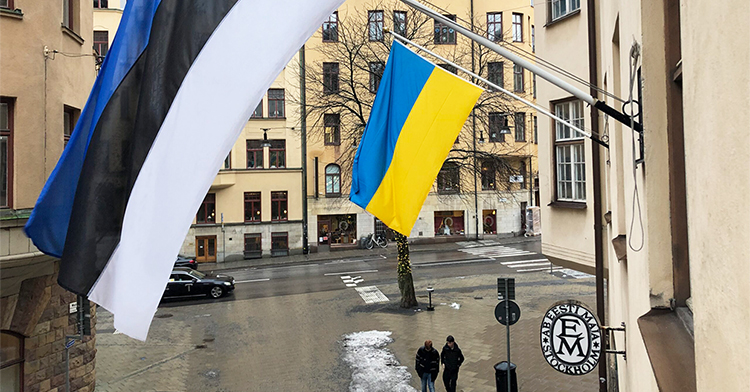 More than 30,000 Ukrainian war refugees have already arrived in Estonia. NGOs and organizations in Estonia have launched many fundraising initiatives in support of the war refugees and for internally displaced people in Ukraine.

The Estonian World Council (ÜEKN) board donated $20,000 to the Ukrainian Congress Committee of America (UCCA). The UCCA is a non-profit, central organization in the United States that represents more than a million U.S. Ukrainians through its member organizations. The fundraising they have launched is aimed at providing humanitarian aid to Ukrainian refugees and front-line defenders on the ground.

The Estonian American National Council (EANC) has also donated $10,000 dollars to the UCCA, with whom they have a long and reliable cooperation.

In addition to financial support, EANC, as well as the Baltic National Committee (JBANC), have actively lobbied the US Congress and Senate in cooperation with the Estonian Embassy in Washington DC, to bring their message to the US administration, and legislators, as well as to inform the US public.

A March 20 virtual forum (War in Ukraine: Perspectives from Estonia) hosted by EANC also highlighted how the organization is heloing ad ways on how the Estonian-American community and individuals can help.

The Estonian Central Council in Canada (EKN) pledged a $5000 dollar donation and has reached out to the Ukrainian Canadian Congress to provide support for a Ukrainian refugee program, once it is announced by the Canadian government.

The Estonian Foundation of Canada made a donation of $10,000 to the Canada-Ukraine Foundation's Ukrainian Humanitarian Appeal.

Estonian Ecumenical Relief Organization (ERRO) in Canada has already donated $10,000 dollars to the Estonian Refugee Council  (MTÜ Eesti Pagulasabi) to help refugees arriving in Estonia from Ukraine. A further $10,000 dollars is hoped to be raised soon. Much of the first donation came from Estonian Canadian Women’s Alumni Association (AKEN) who donated $7,000 to help children who escaped the war in Ukraine and support their livelihoods in Estonia.

More on how to donate in Canada:
https://eestielu.com/et/uudised/kohalikud-uudised/12682-eero-taeban-anne...

On the initiative and with the help of Estonians living in London, the Estonian Embassy in London organized a charity auction a week and a half after the start of the Ukrainian war, which raised £ 56,190 for Ukraine in one night. The money was transferred to withukraine.org humanitarian fund in agreement with the Ukrainian embassy.

A collection campaign for humanitarian supplies was organized by the Stockholm branch of the Swedish Association of Estonians (REL) at the Stockholm Estonian House, and the collected items were sent to the Polish-Ukrainian border.

The Estonian Society of Sydney organized a 'Live Music for Ukraine' concert at the Sydney Estonian House with all proceeds being donated to the Australian Red Cross Ukraine Crisis Appeal campaign.

Many other Estonian organizations around the world (in Belgium, Germany, etc.) are also contributing with local fundraisers, political lobbying, and humanitarian efforts.